Tavrida Electric releases a new REZIP automation algorithm for the Rec series reclosers with RC5 control cubicles. The REZIP is used to automate distribution networks where coordination with a traditional time and current grading is impossible. It allows connection of any number of REZIP reclosers in series to achieve exceptional reliability of the line when it is normally impossible to install more than 3 or 4 protection devices having automation and relay functions due to selectivity issues. The new automation function does not require any additional costs associated with hardware modification and is available for all RC5 control cubicles with the new firmware update.

The REZIP algorithm has been designed to overcome two fundamental problems that arise in medium voltage distribution networks:

Protection coordination issues. Fast-acting protection devices must limit the duration of short-circuits to avoid unnecessary stress on the components in the distribution network and prolong their lifetime. This leads to a minimization of relay protection delay time. Following this principle, a substation circuit breaker equipped with a microprocessor-based relay must clear a fault within 1 second to backup downstream protection devices and reduce the destructive effect of short circuits in the protection zone. This leads to the fact that the maximum number of protection devices (reclosers) installed on the same line is limited due to selectivity issues. Normally, each recloser installed on the same line is allowed to have 200-250 ms time grading margin to ensure coordination with the upstream protection devices. In this case the maximum number of reclosers including a substation circuit breaker is limited to 4 devices. The necessity of having a larger number of reclosers capable of clearing faults and isolating the line is closely associated with coordination problems. With installation of new reclosers on the same line, a time grading issue arises as each new protection device will not be selectively coordinated. As a result, two or more reclosers will trip at the same time which cannot be accepted and thus must be avoided by all means.

Electricity distribution low efficiency. The EU legislative acts (EN 50160 and CEER regulations) related to reliability of the electricity supply came into force and have triggered the process of automation of the distribution networks. As per the EU legislative acts, there is a limited amount of unplanned short-duration interruptions (normally 3 mins is considered as a momentary interruption level), which are not included in the penalty plan. Longer power outages impact negatively on the reliability indices such as SAIFI and SAIDI reported by the distribution companies resulting in larger fines paid to national regulators of electricity. Considering the momentary interruption level, the companies aim to minimize the number of affected customers and restore the power supply within 3 minutes. This is almost an unreachable target without an efficient automation algorithm.

The most typical solution adopted by distribution companies to solve the fundamental problems is to install sectionalizers based on motor operated load-break switches used to isolate faults and reconfigure the network after the upstream protection device have tripped. The protection coordination issue is solved in this case, but the method of fault detection, isolation, and recovery (FDIR) has now become obsolete as it requires complex and time-consuming sequences of manual operations from the dispatcher and utility engineers to provide supply to affected customers. The whole process may take up to one hour which is far beyond the accepted interruption level. As a result, distribution companies are obligated to pay penalties which increase every year.

REZIP is the ideal solution for networks with a growing demand for Smart sectionalizing equipment. Unlike a conventional recloser, the REZIP recloser can be used in radial, ring and meshed networks without any limitation on the number of devices installed. Practically, this means that any number of REZIP reclosers can be connected in series without coordination problems.

The principle of operation of the REZIP automation algorithm is very simple yet extremely efficient. The algorithm is initiated when the upstream recloser (R2) trips. See Figure 1.

Once the loss of supply is detected, all REZIP reclosers (REZ1, REZ2, REZ3) trip during the recloser dead-time. See Figure 2.

REZIP automation algorithm is applicable in meshed grid automation schemes together with ABR functionality. After the fault between the REZIP reclosers (REZ2 and REZ3) is sectionalized, the recloser equipped with the ABR function (R3) restores power to affected customers in the shortest possible time. See Figure 5.

As a result, the FDIR technique is a completely automated process which provides the highest level of reliability, service and safety for advanced distribution networks. The whole process from the detection of the fault to restoring power supply to affected customers can be easily adjusted to comply with most stringent requirements of distribution companies.

In general, the REZIP recloser offers the following benefits to electric utilities in comparison to traditional sectionalizers: 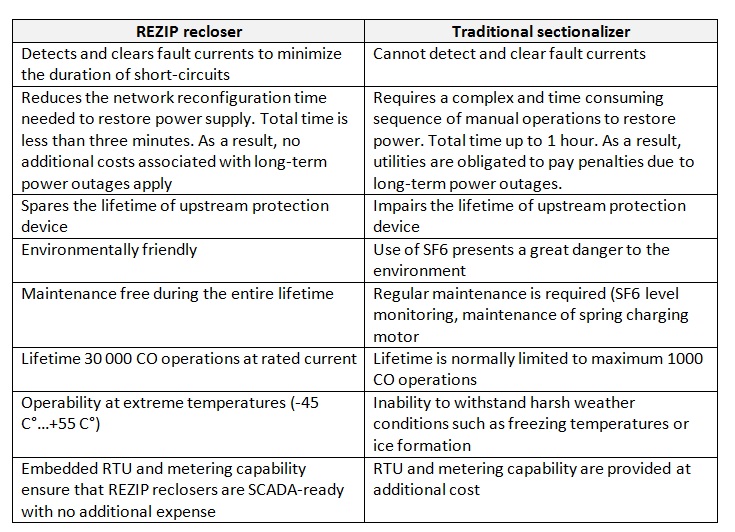 The REZIP algorithm for distribution automation has attracted great interest. This concept was first introduced at the significant seminar held by Tavrida Electric in AGH University of Science and Technology in Cracow in the beginning of 2017. This university in Poland is well known for its technological innovation and research in distribution automation. Among the participants were academic staff members from the university and representatives from distribution companies. The seminar was supported by the Smart Grid platform (www.smartgrid.agh.edu.pl) established by the Department of Electrical Engineering. The Smart Grid platform aims to promote new efficient approaches to encourage distribution network reliability.

In addition, Tavrida Electric has reinforced this success by holding a series of successful public presentations for all distribution companies operating in Poland, such as Energa-Operator, Tauron Dystrybucja, PGE Dystrybucja and ENEA Operator who were interested in the practical aspects of this issue. Furthermore, Tavrida Electric has released several articles describing the principle of implementation of the REZIP algorithm in the Polish distribution network. For example, an article entitled “REZIP – faults location and power supply restoration system for MV networks – a solution from Tavrida Electric” was published in March 2017 in “Wiadomości Elektrotechniczne”, one of the best known journals in the field of electrical engineering in Poland that aims to publish the most complete and reliable source of information on innovations in this area.