Tavrida Electric introduces the new OSM with high sensitivity current transformers (CT) capable of detecting earth fault currents from 200 mA. The new OSM has been developed to respond to customer demand for reliable protection against high impedance earth faults in isolated neutral systems and resonant grounding systems where the neutral point is grounded via an Arc Suppression Coil (ASC), also known as a Petersen coil. 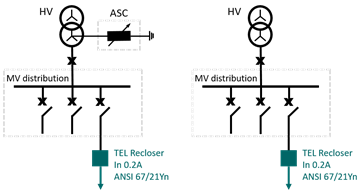 Resonance grounding is primarily used in overhead line networks where most of the faults are single phase‐to‐ground faults, which are responsible for 90% of interruptions. The ASC compensates capacitive fault currents supplied by outgoing feeders and reduces the fault below the level of self-extinction. Hence the use of ASC allows clearing of all transient earth faults without actual tripping a feeder.

Although the capacitive current can be fully compensated, the active part of the current cannot be compensated by any ASC. This fact raises a serious challenge for protection devices in case of permanent earth faults which cannot be cleared by the ASC. The remaining active part of the fault current presents a great danger for maintenance personnel and overhead line equipment. To minimize the risk of personal hazards, fatal accidents and substantial damage to equipment caused by fire it is absolutely necessary that permanent faults are cleared by the upstream protection device (substation circuit breaker or recloser).

Due to the fact that operation of the ASC results in a much lower current at the fault location, the upstream protection device must provide the ultimate sensitivity to detect earth faults starting from as low as 0.2A and allow the diagnosis of transient and permanent faults affecting the network.

In isolated neutral systems a serious sensitivity problem would arise in overhead line networks with short distribution lines <7-10 km. In such networks the earth fault current magnitude would tend towards zero at the end of distribution line. In the same way as in the case of a compensated system, this becomes a great challenge for protection devices to react and clear such faults which present the same hazards and risks to maintenance personnel, equipment or even random people and animals being in close proximity to the fault location. Installation of the sensitive recloser close to the end of protected line would help substantially to improve the reliability of isolated networks.

The next-generation OSM equipped with carefully matched CTs is perfectly suited for isolated neutral and modern ASC compensated networks as it provides much higher sensitivity to high-impedance earth faults than conventional reclosers currently available in the market. With the release of new firmware, the REC (assume it should be capitals) series recloser can detect and clear phase‐to‐ground faults starting from 0.2A using traditional sensitive earth fault protection or advanced admittance-based protection to meet the requirements of modern compensated systems.

The new product has already aroused great interest in Central and Eastern Europe as well as in the Nordic countries who have been traditionally using and developing resonant grounding systems for many decades.